Thanks to Johnston Memorial Hospital,
Greg can enjoy spending time with his stepchildren. 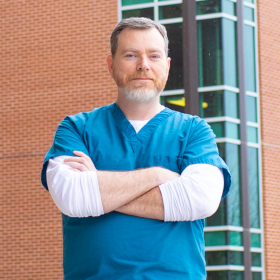 In the fall of 2016, Greg was juggling a job as an MRI technician at Johnston Memorial Hospital and transporting his three stepchildren to various sporting events, when he suffered his first heart attack. He had a major blockage of the left anterior descending (LAD) artery. “They call it a widow maker,” he says. His life was saved by the quick actions of emergency department staff at Johnston Memorial. “They put in two stents super quick,” he says.

Greg was at increased risk for heart problems because of a strong family history. Both his father and brother had heart attacks in their 50s. “It’s hard to outrun genealogy,” he says. In early 2019, shortly after the death of his wife, he suffered a second heart attack and, once again, was quickly treated by Johnston Memorial staff.

Since becoming a heart patient, Greg has gained a greater appreciation of life, and savors moments with his stepchildren with more vigor. “I live for moments with the kids,” he says.