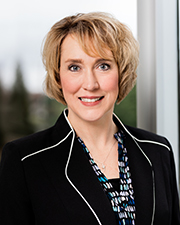 Lindy White brings more than 20 years of executive experience to her role as president of Ballad Health’s Northwest Market, which includes Ballad Health’s two Kingsport hospitals as well as the hospitals in Hawkins, Hancock, Wise and Dickenson counties and the planned hospital in Lee County.

Under her leadership, hospitals have received national awards for clinical quality, patient satisfaction and nursing excellence.

White earned her bachelor’s degree in accounting and economics at Emory & Henry College in Emory, Virginia. She later earned her master’s degree in business administration at Old Dominion University in Norfolk, Virginia. She is a certified fellow at the Advisory Board Company, and in 2014, she was appointed by the governor of Virginia to serve on the board of directors for the Southwest Virginia Higher Education Center.

She currently owns a farm in Gate City, Virginia.