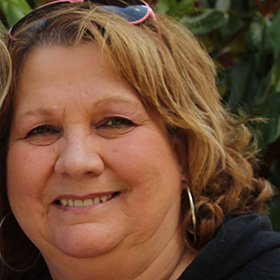 “Invasive Stage 3 breast cancer.” At 56 years old, these were the last words Kathaleen expected to hear when she visited the doctor to check out a knot and “red place” on her right breast. Six months earlier her annual mammogram results had come back normal. How could this be?

After another mammogram and an ultrasound, cancer was discovered in 12 out of 22 lymph nodes. She would need a mastectomy. Kathaleen was stunned and had no idea what to do.  A friend recommended that she see Dr. Paul Armstrong, a surgeon at Johnston Memorial Hospital.

“My family went with me to the appointment,” says Kathaleen.

“Dr. Armstrong was so patient and went through the entire process, he didn’t rush us through. He was so positive and reassuring. He told me, ‘The love you and your family have will keep you going.’”

Cancer nurse navigator, Kim Hall, also was there for Kathaleen and her family, she says. “Kim was a lifeline for my children. She helped with any and all questions and kept in touch throughout everything.”

Ahead lay months of treatment. After a mastectomy within a month of her diagnosis, oncologist Dr. Anthony DeSalvo and radiation oncologist Dr. Bernard Tisdale guided her through six rounds of chemotherapy, followed by radiation, another 12 doses of chemo and then more radiation.

“During the whole treatment process, the entire staff, from receptionist to the nurses, was fantastic,” recalls Kathaleen.

“Dr. Tisdale’s nurses got teary-eyed with me. Dr. DeSalvo allowed my son to be on speakerphone when he couldn’t be with me. Kim Hall made a huge impact on me as a caregiver.  Everyone went above and beyond for me in every aspect.”

One day when Kathaleen reported for a chemo treatment, she was especially upset in the waiting room as she realized the treatment would prevent her from being part of her new grandchild’s upcoming birth.

“Dr. DeSalvo and his nurse came to me and arranged for me to have the chemo a few days later after my granddaughter was born instead of that day. They changed everything around so I could be there,” says Kathaleen.

The doctors, the nurses, the navigator, the whole staff – they’re all different but all amazing. They went above and beyond to keep me going and feeling positive. No questions were left unanswered. If I knew of someone diagnosed with cancer and they didn’t know where to go, I would highly recommend Johnston Memorial Hospital. I wouldn’t go anywhere else.”