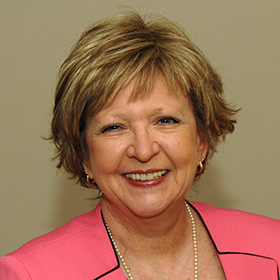 After Donna beat breast cancer in 2006, she never dreamed that less than seven years later, she’d have to fight cancer once again.

In 2013, Donna was diagnosed with Stage IV metastatic breast cancer. This time, she turned to Ballad Health’s cancer practice in Johnson City, where Dr. Fadi Abu-Shahin mapped out an aggressive treatment plan.

A year later, Donna was (and remains) completely cancer-free – and she still thanks the angels from her cancer team for saving her life.

In January, 2013, I was diagnosed with Stage IV metastatic breast cancer. There were tumors present in my adrenal glands, my bones, my liver and my brain.

This was a recurrence of an earlier episode of breast cancer in 2006. I was a cancer patient in Kingsport at the time of my diagnosis; however, my husband and I had moved to Johnson City, and the cancer center had just opened here.

With that in mind, I agreed to go to the Johnson City facility. I was seen by Wendy Vogel, nurse practitioner, and Dr. Fadi Abu-Shahin.

I was immediately put at ease regarding my illness and was given a fairly good prognosis. Dr. Shahin wasted no time in mapping out an aggressive treatment plan.

Dr. Shahin had knowledge of a new treatment that had been successful in patients with the type of cancer I had. I don’t believe he had any other patients on this treatment, but he felt like it was the best medication available to me.

After ten brain radiation treatments and four chemotherapy treatments, he sent me for a scan.

And the cancer has not returned.

Dr. Shahin and the entire staff in Kingsport and in Johnson City are second to none in their level of care. I refer to them as “my angels!”

I thank God each and every day that He gave my care team the wisdom and the knowledge to know exactly how to treat my illness!