“I was hurting so bad I didn't know what was going on.” 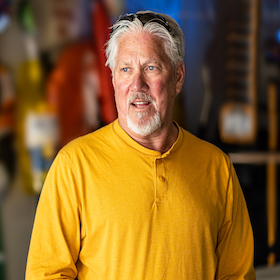 I've worked for the Eastman Chemical Company for 44 years, but I'm retired now. I'll be 68 in May, and I'm about as healthy as I've ever been. I'm pretty active. I'm a motorcycle rider and I'm a big skier. I started skiing in the late 1970s, and I've been all over – out west and to Europe several times. I can drive to the slopes from where I live in the Tri-Cities area. Believe it or not, I've got most of my lift tickets.

One night in April 2019, I can home after skiing and I felt miserable. I was hurting so bad I didn't know what was going on. My daughter, Whitney Johnson, was working as a nurse at Surgical Associates of Kingsport, and set up an appointment with Dr. Elizabeth Jackson. She had treated me for diverticulitis a couple of times before. Diverticulitis is an infection or inflammation in the intestines. It caused pain in a certain place in my side and would act up maybe once a year. But when it hurt, it hurt bad.

That last time it happened, Dr. Jackson said it was time I had a colon resection to remove the damaged part of my colon before it ruptured. If that happened, it would be bad. I’d never had any kind of surgery before. I was leery and scared and all that, so I told her I’d think about it. But my daughter talked me into it.

Dr. Jackson mentioned that she’d do the surgery at Holston Valley Medical Center using the da Vinci robot and what that meant.

“I'm telling you, it's awesome. It was like nothing I ever expected.”

She gave me all kinds of stuff to heal faster and I did everything she told me. She took 12 inches of my colon out. And while she was there, she found out my appendix was infected so she took that out, too. I was in the hospital one night and the next day after surgery, I was starving to death. I asked Dr. Jackson what I could eat and she said I could go back on a regular diet. That surprised me. So, on the way home we stopped and I got a humongous hamburger. Can you believe that? Just one day after surgery.

I didn’t really have any pain. That surprised me. I did have some weight restrictions for a few weeks. I wasn’t able to lift over 10 pounds, so I couldn’t ride my motorcycle for a while. But now, I’m about as healthy as I ever was. And you can hardly see the scars where they did the surgery. I’m back to skiing, too. I went last week. I should have gone today, too, because we got snow up here last night.

I haven’t had any problems since the surgery. And I was really pleased with how smoothly everything went. Everyone at Holston Valley Medical Center was so good to me. And Dr. Jackson? I’m telling you, she’s is the best.

Find out if robotic-assisted surgery is right for you