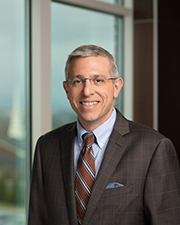 Alan Levine is Chairman and Chief Executive Officer of Ballad Health, an integrated health system serving a region of Appalachia including Northeast Tennessee, Southwest Virginia, Eastern Kentucky and Western North Carolina – a region the size of New Hampshire.  In addition to operating 21 hospitals, Ballad Health operates the nation’s largest Accountable Care Community, home health, pharmacies, skilled nursing facilities, rehabilitation services, Ballad Behavioral Health Services, and Ballad Ventures, an innovation arm focused on investment in emerging services and technologies. With $2 billion in annual revenue, Ballad employs 14,000 people, including 800 physicians, and has more than 4 million patient contacts annually.
Prior to serving as Chairman and CEO of Ballad Health, Alan served for more than 25 years as chief executive officer of hospitals and health systems ranging from a small rural hospital to one of the largest public systems in America.

Alan’s commitment to public service spans multiple states. Most recently, he served on the health care transition team for Virginia’s Governor, Glenn Youngkin. He chaired, or co-chaired the health care transitions for Governors Ron DeSantis of Florida, Governor Rick Scott of Florida and Governor Jeb Bush of Florida. Alan was appointed by Governor Bill Lee of Tennessee to serve on the Tennessee Charter School Commission.

Alan also served on Louisiana governor Bobby Jindal’s cabinet as secretary of Louisiana’s Department of Health and Hospitals and as Governor Jindal’s senior health policy advisor. He also served as deputy chief of staff and senior health policy advisor to Florida governor Jeb Bush prior to his appointment by Governor Bush to serve as secretary of Florida’s Agency for Health Care Administration, an agency responsible for administering a $17 billion budget. In these roles, Alan oversaw the health care response to 12 major hurricanes making landfall in Florida and Louisiana, managed Louisiana’s response to the H1N1 Influenza Pandemic, led Louisiana’s effort to improve child immunization rates from ranking 48th in the nation to 2nd, successfully advocated the passage of major and historic health care reforms in both states and was recognized for his efforts in combating fraud and abuse in public health care programs.

In his service on the board of governors of the State University System of Florida, the governing body of Florida’s 12 state universities, he has served as chair of research and academic excellence and as chair of Audit and Compliance. He served as the Chair of the Florida Higher Education Coordinating Council, a policy-setting body for public and private education in Florida.  He also serves on the Board of Directors of the H. Lee Moffitt Cancer Center, Florida’s most advanced cancer research and treatment center, and also serves on the board of directors of Axogen, a publicly traded company. Recognized by Modern Healthcare magazine as one of the 30 Americans likely to have a powerful impact on health care in the next 30 years, and as an up-and-comer in the health care industry, Alan is widely recognized in the health care industry. Most recently, Alan was recognized as a Junior Achievement Laureate and named to the Business Hall of Fame in upper East Tennessee.