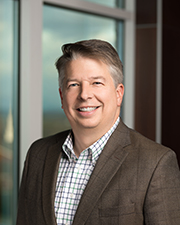 David A. Golden is the Chief Executive Officer of the ETSU Research Corporation and the Allen and Ruth Harris Chair of Excellence in ETSU’s College of Business and Technology.  David recently retired as Senior Vice President, Chief Legal & Sustainability Officer, and Corporate Secretary for Eastman. At the time of his retirement David had responsibility for Eastman's Legal, Sustainability, Corporate HSES, Communications, and Global Public Affairs and Policy Departments with personnel in the United States, Europe, Latin America and Asia. He also had overall responsibility for Eastman's Ethics & Corporate Compliance program.

David is deeply involved in community and civic affairs, and charitable partnership initiatives. He serves on the Tennessee Registry of Election Finance, which oversees all state-level political contributions and expenditures.  He is on the Tennessee State Collaborative on Reforming Education at the invitation of former Senate Majority Leader Frist. He is also on the boards of Music for All, the Niswonger Foundation, and Ballad Health.