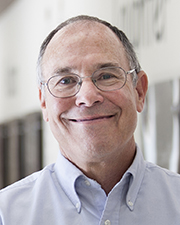 Ned known for his excellent nursing skills, but it’s his attention to patients and people as a whole that truly sets him apart.

If there’s a problem, Ned goes above and beyond to solve it. One weekend, one of Ned’s patients was worried about his dogs – he had no one in his life who could take of them while he was in the hospital. The patient even considered leaving the hospital early for the dogs’ sake. That Saturday, though, after Ned left work, he bought food for the dogs and went to the patient’s house to feed and take care of them. On Sunday, even though it was Ned’s day off, he went back to the house to make sure the dogs were ok.

Recently, Ned had a patient who was unable to sit up in bed. In talking with her, Ned discovered they both enjoyed reading and favored the same literary genre. The next morning, one of Ned’s team members heard Ned talking in the room, and quickly realized he wasn’t just chatting – he was reading to the patient, since it was too difficult for her to hold the book.

The patient was very ill and passed away while she was on Ned’s unit. Before her family packed up her things, they left the book for Ned because he was so special to her, and they wanted him to know how much his care and attention meant.

The example Ned sets is one of unparalleled compassion and connection.